Two weeks ago, Film Series : The Cat, informally known as FS, passed away at the age of 19. She had stayed amazingly healthy right up until early last year, when she showed signs of kidney disease. Even then, she had few symptoms until she began to rapidly decline over the last couple of months.

As difficult as it was for the family to face the loss of our kitty, I made the decision not to seek any invasive or uncomfortable treatments that would only prolong her life, rather than bring her back up to a comfortable plateau. When she began rejecting all food, even with anti-nausea medications, the veterinarian and I agreed that it was time to let her go, rather than force feed her or let her starve, and she was euthanized while I pet and held her.

FS was part of my life ever since I graduated college, and every day, I catch myself acting as if she is still there, from not wanting to leave the door open too long in case she is in an escaping mood, to hesitating before drinking from a water glass that had sat somewhere she could have reached and helped herself. I loved her very much and still do. The speed at which she declined was both a blessing, in that there was not a long time period where she lingered before the decision that had to be made was clear; and a curse in that it gave us relatively little time to emotionally prepare for her loss.

My son and I have taken comfort in sharing our memories and in planning a small memorial book to keep with her cremains. He had originally wanted a cat shaped urn for her, perhaps a 'lucky cat' in the Asian style, but decided that the lovely cedar box she was returned in was sufficient. The care and sympathy that the vet clinic and crematorium have both shown has been a kindness to both of us. 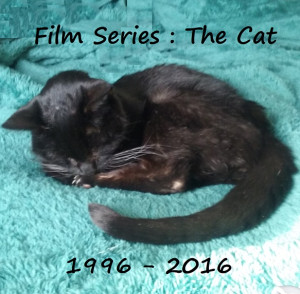 On one hand, Henry's presents are now sitting on the table with the tree with a velvet throw hiding them as "wrapping". On the other hand, I got them completely unpacked, untangled and in the neccassary case batteries put in. So while the "unwrapping" process may be overly quick for anticiaption, the "getting it out and playing with it" process will be quick and painless....

It has come to my attention that about half my facebook "friends" are people I went to high school with, haven't talked to since, and in many cases, didn't talk to much then. I mostly just accepted their friend invitations on the basis that I remembered their names and wasn't sure how much traffic there would be....

I dunno, I'm tempted to do a friend purge down to the people on the list I actually consider.. you know, FRIENDS. Or at least regular internet aquaintances. And purge everyone who does that silly Mafia Wars facebook game. *grump*

Is it rude to drop facebook friends without explaination? Is it ruder to announce a coming purge a couple of days in advance? Exactly how rude (also egotistical) would it be to post an update asking everyone to leave a comment saying in what way they consider themself my friends and purge the ones who say "um, we were in the same junior english class and I always thought you were funny even though I never spoke to you when there was someone more popular available."?

If there is one person or more on your friends list who makes your world a better place just because they exist and who you would not have met (in real life or not) without the internet, then post this same sentence in your journal.

Hope your longest night is bright and full of laughter!

I actually have physical cards this year, though weather and work have conspired with my usual lameness to delay them. As usual I didn't record addresses last year, so those who want cards should give me a reminder address.

And now, off to drive through the snow to my 2am work shift... yeah income, argh not getting anything done this week....

As most of you probably know, I'm a great big repressed hippy who dreams of co-housing but lives in a single family with only one somewhat close relationship with a neighbor (who is across the street so we can't even do shared back yard things). So I've found myself wondering... is there any chance that the current economic meltdown might leave the general public more open to the idea of intentional communities, cohousing and co-op-ing, and form a "teachable moment" in which to plant the seeds of more interdependence and less rugged individualist nuclear family thinking?

Well, probably not, but it's a thought...

...So I'll livejournal on a political topic. But since everyone else has done the presidential election, and I've been weirdly apathetic about it this year (yeah, I don't want another republican administration, I'm voting for Obama, whatever...) I'll comment on the three ballot questions in Massachusetts.
( Collapse )

I don't know why I'm so politically apathetic this election cycle. Maybe I just don't have the energy for it. Maybe I've gotten so cynical I don't think it can matter. Oh well. My big political effort will be getting an absentee ballot so that I can vote even though I'll be in Vegas on the 2nd...

I tried to save a coworker from a tumbling pile of boxes today, and thought I had largely succeeded (she still got bumped but I stopped them before they actually became a pile of boxes on top of her) then an hour later or so she mentioned that she was having pain in her head and occasionally feeling nauseous and "out of focus". So, apparently I was not fast enough to prevent her from being possibly concussed. :-( Ah well, maybe next time instead of the "push the pile back up into a non-tumbling position" move I should try for "tackle coworker out of the way and be crushed by the whole pile myself" routine. At least they were big boxes of paper towels instead of the smaller but MUCH heavier boxes of laundry detergent a few rows down.

In unrelated work related news, I would like to note that only people actually qualified to manage me should be MICRO-managing me. Random coworkers who have no more time on the job than I do and aren't even as good at it MAY NOT nitpick the way I do my job and try to tell me the right way to do it...

I need a Present Opening Multitool. It will have :

*A hooked bladed tool designed for cutting injection molded plastic without harming the toy inside.

*A seam ripper for the "hair sewed into the packaging" moments.

*One of those "safety letter opener" jobs (but thin) for ribbons, tape and plastic bands.

Other tools will be added or adjusted during beta testing...
Collapse